Etherium, your new futuristic RTS from Tindalos Interactive - developers of Stellar Impact - warps into closed-beta today, accessible by those who pre-order the game from the Steam page.
During beta, you'll have access to the full multiplayer content, single player tutorials allowing you to get to grips with the basics before heading into the fray. We remind you that pre-order players also enjoy 10% off.

Etherium will release in two weeks, on March 25! Anticipating this imminent release, and following the previous gameplay video that offered a global overview of the game's features, Etherium details its Conquest mode through a dedicated gameplay video.

In Conquest mode, a real galactic conquest awaits you. In this entirely non-linear mode, plan your tactics in turn-based, building invasion fleets, developing your technology tree to unlock new units and skills, spying on the enemy and sabotaging them, and ultimately invading their territories and planets in real-time strategy battles! You are free to decide how your conquests progress. Manage your resources, expand your colonies and extend your control of the map to assemble an army capable of crushing your opponents.

When invading an enemy planet or territory, you are sent to real-time strategy mode, where epic battles will ensue between formidable armies comprising numerous units: infantry, tanks, aircraft, and even gigantic colossi of war several dozens of meters high; real machines of destruction! Technological advancements made during turn-based view will let you use increasingly more powerful or specialized units: use scientific research to develop a tech tree enabling you to unlock new units and upgrades, access new structures to develop your colony and to use new special skills.

Etherium is currently available for pre-order with a 10% discount offer. The game will release on PC on March 25 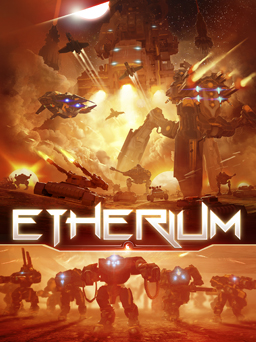