Massive monster massacre!
Although Final Exam is being released this week on PC and the PlayStation®Network and today on Xbox LIVE®Arcade, you can play this 2.5D sidescroller packed with frenzied action and caustic humor right now as a trial version that is much richer and more exciting than a mere demo!
Also available today on Xbox LIVE and PSN, you can access the tutorial and the first chapter of Final Exam in the demo to play solo or with up to 4 players in Co-op mode and unlock numerous weapons, skills and combos. Score fanatics, fans of ultimate combos and slugfest purists please note: the demo has its own official solo and multiplayer leaderboards!
Similar to the full game, the demo version takes on a whole new dimension in Co-op mode. Split your team up to achieve your objectives as quickly as possible or stick together to increase your chances of survival: in Co-op, Final Exam has more explosions and more monsters to guarantee hours of hair-raising gaming thrills! Replay a chapter with your new weapons and skills to improve your score and reach the top of the leaderboards!
It\'s the perfect opportunity for those who haven\'t yet played this high-octane fun sidescroller from Mighty Rocket Studios to discover the frenetic gameplay and rich content while indulging in massive monster massacre!
Final Exam is available on PC, the PlayStation®Network and Xbox LIVE®Arcade.
- The download page of Final Exam demo version
- Download the presskit (21 MB)
- Watch the video
- Visit the official website
Back Back 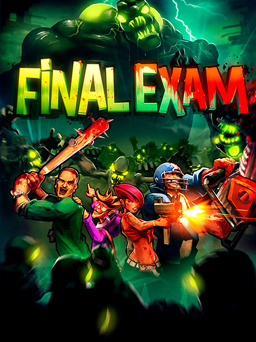