Today, just one week before the hotly-awaited launch of The Next Big Thing, Pendulo Studios is giving adventure gaming fans a chance to personally check out the game with a new playable PC demo!

The demo puts you in the shoes of young Liz Allaire, one of the game’s two playable characters, in the midst of a journalistic investigation with her colleague Dan Murray. The Horror Night Ceremony is in full swing, and while our journalist duo is covering the event, Liz stubmles upon some suspicious activity. She witnesses the famous Hollywood monster actor Big Albert breaking into the office of his boss, Fitz Randolph, who also happens to also be the biggest horror movie producer in the biz.

The demo will give adventure fans a taste of the crazy, funny adventure to come. The Next Big Thing is loaded with whacky characters and puzzles of all types.

The Next BIG Thing is planned for release in retail stores and digital download for PC the 21st of April.

- Visit the official website of The Next BIG Thing


About The Next BIG Thing :
After having put the adventure game genre back into the spotlight with the Runaway trilogy, which had captivated more than a million players during the last decade, Pendulo Studios is back with an original, great adventure game. The Next BIG Thing revisits with class and humor the fantastic movie genre with a modern, funny adventure packed with hints and references made to popular movies and TV shows.

The story introduces the couple of charismatic heroes Dan Murray and Liz Allaire involved in an incredible and crazy adventure, full of twists and packed with moments of pure comedy! With \"The Next BIG Thing\", Pendulo Studios stay faithful to their unique graphic style that puts their games close to actual animated movies. The Next BIG Thing also maintains Runaway’s popular and beloved ingredients: an intricate story, funny and charismatic characters, wacky mysteries and puzzles, and a definite adult and modern tone.

The adventure sets off again with The Next BIG Thing, in an original and fantastic story, loaded with humor, twists and turns, and crazy monsters!

The Next BIG Thing is planned for release in retail stores and digital download for PC the 21st of April.
Back Back 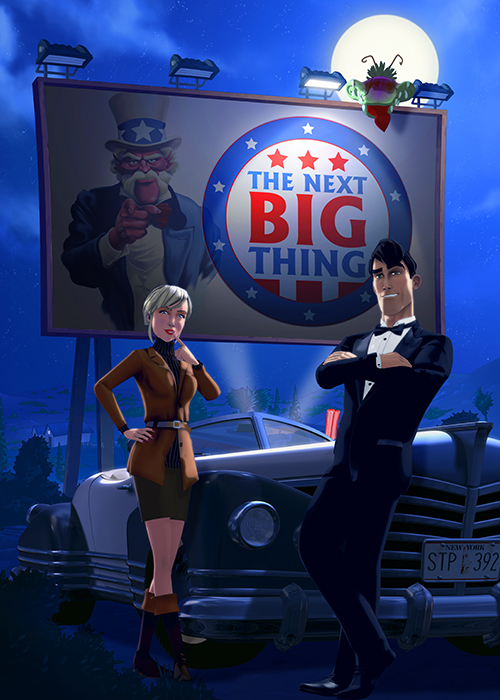